Radu Vodă Monastery – the Church of Healings
At no. 2-4 Radu Vodă Street, surrounded by blocks, but without being undermined by this fact, we find the Monastery of St. Troiță “Radu Vodă”. It is dedicated to the Holy Cross (St. Trinity) and the place was declared a historical monument in 1992.
Autor Flaviu Predescu
20 dec 2019, 08:10 | 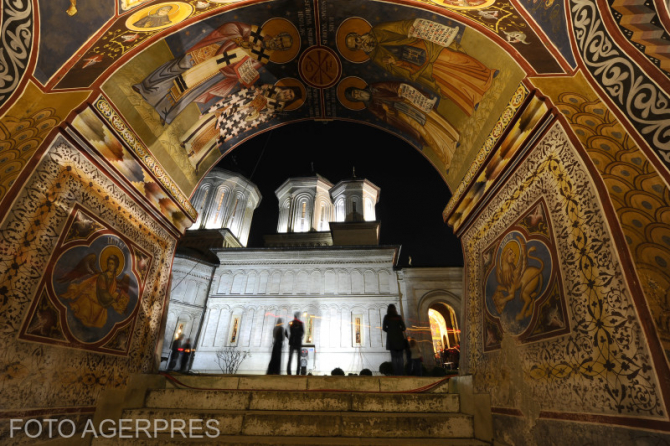 The monastery of Radu Vodă, with the consecrations of the Holy Trinity and the Saint Hierarch Nectarios of Aegina, was founded by Voivod Alexander II Mircea (1568-1577) and his lady, Ecaterina, to thank God that He gave him the victory in the battle he carried on these lands, against Vintilă-Vornicul and Dumbravă-Vornicul. “The architectural plan and forms of the Radu Vodă church are inspired by the Episcopal church at Curtea de Argeş, the difference being that the building material is not stone, but brick. The plan is a triconch, with a tower on the nave, and with an enlarged narthex, with three towers above it. The main of the three towers rests on twelve columns, symbolizing the twelve apostles, similar to the model from Curtea of Argeş” as we learn from the presentation page of the Monastery. (Manastirearaduvoda.ro)

The personality of the place is emphasized as well by the fact that it is located on a hill, so that it looks like a Christian fortress, and the high blocks around it do nothing but protect it from the inclement weather. Located only ten-minute walk away from Unirii Square, the settlement is easily accessible to those who want to cross its threshold. The Atlas-Guide The History and Architecture of the Places of Worship in Bucharest provides us with some relevant information about the history of the monastery. The construction date is controversial and it fluctuates between 1568 and 1574. Later, in 1595, during the reign of Mihai Viteazul (Michael the Brave), the Holy Trinity Monastery was badly damaged by Sinan Pasa's army, during its withdrawal from Bucharest. All the buildings on the hill were set on fire then and the church was transformed into a mosque. 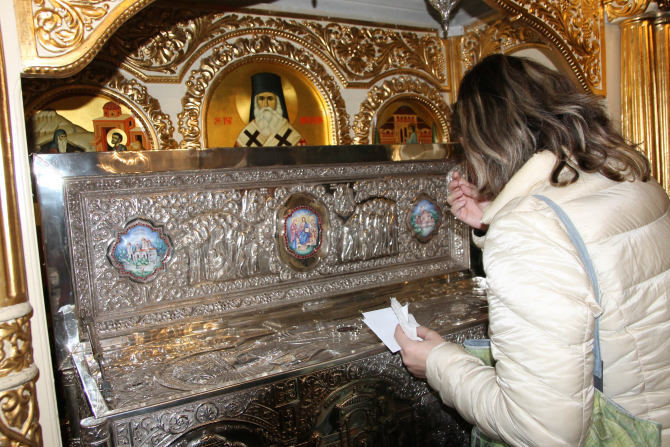 Silver shrine with the relics of Saint Nectarios the Healer Photo: Crișan Andreescu

The same documentary source informs us that in 1615, Radu Mihnea began the restoration of the entire ensemble of the Holy Trinity Monastery, a work which, “together with the painting” was completed ten years later. Thus, from the monastery of 1625, bearing the name of its founder, Radu Vodă, the church and the bell tower have been preserved to this day. It was painted again in 1714 and the porch was added to it. After the earthquakes of 1790, 1793, 1794 and 1802 other repairs followed. It was restored in 1804 by the Hegumen Ignație Iviritorul (T/N - Hegumen – the title for the head of a monastery in the Eastern Orthodox churches) from the Ivir Monastery, located on Mount Athos. Another earthquake, in 1838, caused great damage. Important repairs were carried out between 1859 and 1864. The wooden towers were then rebuilt, and they were covered with sheet metal, the porch (which still exists today) was restored, but some cells and the chapel were torn down.

During 1969 - 1974, extensive restoration work was carried out, at the initiative of Patriarch Justinian Marina. The painting was completely redone by painters Sofian Boghiu, Vasile Caraman and Gheorghe Ciobanu. An interesting aspect is that on the same hill we find the Church of Bucur (St. Athanasius and Chiril Church – “Bucur the Shepherd”) which functioned as a funeral chapel for the monks of the Radu Vodă monastery. Around 1870, it was separated from its courtyard, by cutting the Radu Vodă street. 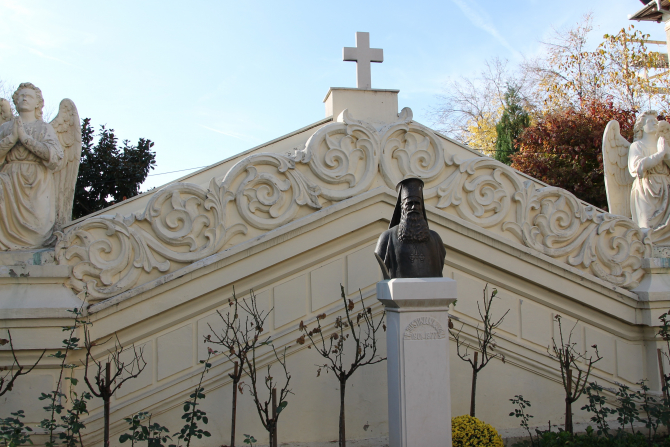 The bust and tomb of the Third Patriarch of the Romanian Orthodox Church, Justinian Marina, at the Radu Vodă Monastery Photo: Crișan Andreescu 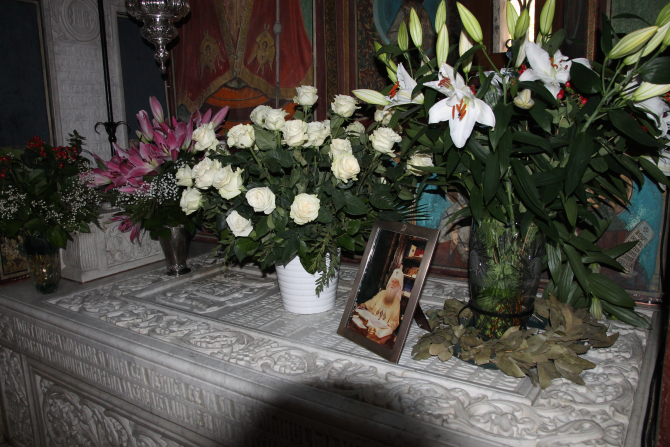 In the opinion of Nicolae Iorga, quoted by Al. Simionescu and Paul Cernovodeanu in the work Traveling through Bucharest - the legend of shepherd Bucur finds meaning precisely in this location, where the shepherd would have found his place and would have lived, on the hill on which the chapel is today. That is where its name comes from. Therefore, the historian believes that there could be the cradle of the fortress.

At Radu Vodă Monastery we also find the relics of Saint Nectarios (Nectarie), and because of this the place is one of the most sought after by pilgrims. The climb to the church itself, similar to the one on the Hill of the Patriarchate, but shorter, gives a special feeling to the believer, who can imagine that he climbs a small Golgotha. About Saint Nectarios it is said: “living like an angel in the body, and loving the incessant prayer, silence, humility, fasting and mercy, the Holy Nectarios drew many to Christ, spilling out around him peace, joy and uncreated light of the Holy Spirit, with which he comforted and rested all who came to his cell. “(doxologia.ro)

Another interesting record is that of Paul of Aleppo, preserved in “The Travels of Patriarch Macarie”. It describes the Radu Vodă Monastery as being situated on the outskirts of the city, on a higher place, surrounded by a river and standing water. He also mentions that during the growth of the water the place could only be reached by using a wooden bridge. The traveler also says that: “it is a great building, with a very pleasant view. Its church is large and spacious, with harmonious lines, highly ornamented and entirely covered with paintings.” 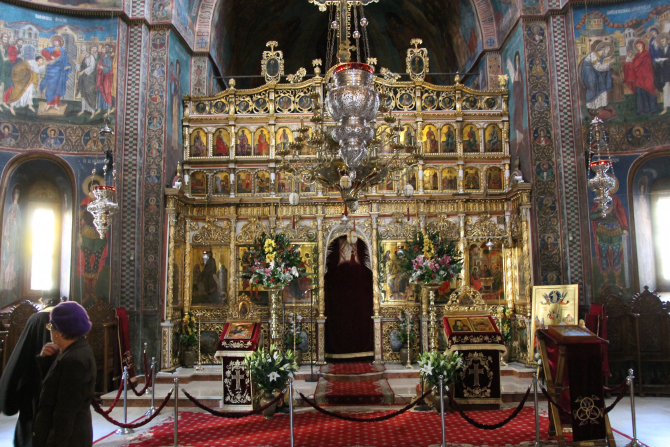 We learn from the same documentary source made public by the monastery that Saint Nectarios is “one of the newest saints canonized by the Ecumenical Patriarchate in the last century. He was born in 1846, in the Thracian Silivria, near Constantinople, from poor but very godly parents. At the baptism he receives the name of Anastasie, and from a young age he was given a good quality Christian education. After the first years of school, Anastasie is sent to learn further in Constantinople, where he studies Theology and writings of the Holy Fathers. Here, his soul begins to discover Christ in his heart, through prayer, through reading the holy books and thinking about the divine.”

In Bucharest - Historical and Artistic Guide, by Grigore Ionescu, we find details about the tomb of the founder, less recorded in other documentary sources. “The most important tomb is that of the founder. Located in the right niche between the narthex and the nave, raised like a sarcophagus above the floor, this tomb is adorned with a stone on which is written, in Cyrillic letters, the history of Radu Mihnea’s life as Lord, briefly told by his son Alexandru Coconul (… )”. The inscription dates from 1626. 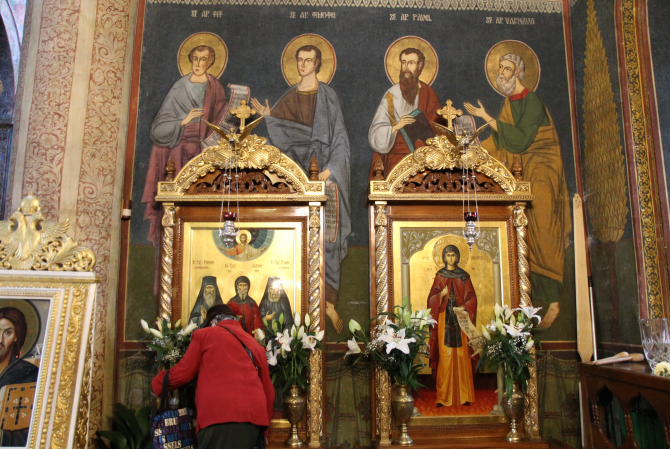 It remains for the tourist coming to Bucharest to visit this wonderful place. One will thus have the opportunity to get in touch with the psychological reality of the city of Bucharest and to travel back in history, from where one will most likely remain with a feeling of joy and peace of mind. The Radu Vodă Monastery even has wonderful sheltered places, surrounded by friendly vegetation during the hot seasons, and it is an ideal place for recollection and for putting order in the thoughts of daily life.